FIFA 16 will hit stores on September 22 and in preparation, EA has begun releasing their top 50 player ratings for this year. EA Sports is just a few weeks away from releasing it’s annual football video game.

The first Chelsea player to make an appearance on the list is the captain John Terry at number 44. 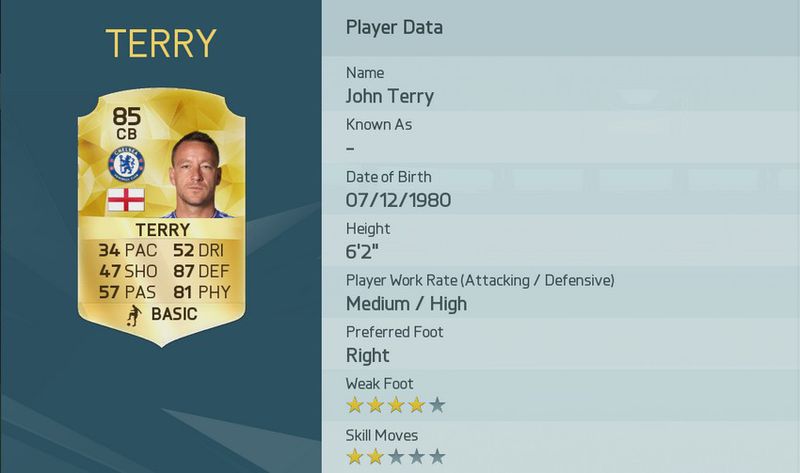 JT moves up two whole rating points from a 83 overall last year to an 85 making him one of the highest rated defenders in the game. So that’s nice. And it shouldn’t be surprising after the fantastic season the 34-year-old just had. FIFA ratings supposedly reflect the real world (though 2-star skill moves are perhaps a bit generous), and given the perception of Terry as one of the best, and all the accolades and awards and praise he received last season, improving his in-game rating is to be expected.

What’s interesting about the fluctuation in his rating is that in both FIFA 14 and 15 he was rated an 83. All the critics both in the virtual world and in real life had started to write off the veteran as someone who was coming to the end of his brilliant career. But now that his rating is the highest it’s been since all the way back in FIFA 12 (86), he’s suddenly gone back a more natural career regression players of his age tend to suffer.

Just when the video game caught up with real life, real life has once again decided to leave it behind. Or has it? Is Terry really done being the world class center back he had once again become after getting written off in 2012-13? Or is this just a minor blip in the road? FIFA’s (trailing) perception is that Terry is still one of the best. Last week, the English media had already written him off. Question is, which one’s the better judge of talent?